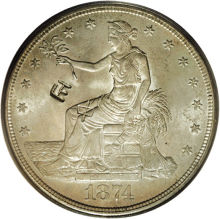 During much of the 19th century, Chinese port merchants refused to accept any foreign coins other than Mexican reales. American merchants importing goods from China were forced to pay premiums of up to 15% to purchase reales in order to pay for goods they wished to import. These coins were often unavailable, even with the 15% premium because importers from other countries were faced with the same dilemma of trying to purchase the Mexican coins. Around 1870, Congress was petitioned to manufacture a coin matching the weight of the reale. The intention was to allow the “trade” coin to circulate in China to relieve importers of their problem. In 1873, trade dollars began circulation in China and were accepted by Chinese merchants who “chopmarked” the new coins with characters representing names and trademarks to verify acceptance.

Also in 1873, as the coins were released in China, the United States silver lobby managed to pass legislation giving the overweight trade dollar legal tender status in the U.S. for purchases of five dollars or less. In 1876, silver prices fell drastically. Suddenly, their face value was higher than their bullion value. Congress revoked legal tender status, but continued to mint coins for Chinese export. U.S. merchants began buying trade dollars at a 20% discount and passed the coins on to employees for a brief period basically robbing them of 20% of their wages. It was not until 1965 that legal tender status was restored to the trade dollar. Of course, by then the coins had numismatic value surpassing both the coins’ silver content and face value.

In 1916, Adolph Weinman’s designs of the “Winged” Liberty dime and Walking Liberty half won…

Congress passed a resolution on April 21, 1787 authorizing a contract to produce a large…

Demise of the Dollar Coin

There have been many attempts to produce a coin to replace the dollar bill. From…

We love to hear from our customers! Feel free to send us your questions, comments or requests, and we'll get back to you soon.
Get In Touch
Copyright © 2022 Coin Purse
Website Design & Hosting by PixelCraft Studio
Back To Top